From CES Newbie to Innovation Darling

In 1973, about 10 Korean companies, including Goldstar (now LG Electronics), Taihan Electric Wire, and Dongnam Electric, landed in the United States with radios and black-and-white TVs. This was to participate in the Consumer Electronics Show (CES), the world's largest consumer electronics and information technology exhibition, held in major cities in the United States since 1967.  Samsung Electronics opened its first exhibition in 1979. The Korean Pavilion opened at CES in 2000.

At this year's CES, which was held offline for the first time in two years due to COVID-19, a Korean company emerged as the 'main character'. At booths of Korean companies such as Samsung Electronics, Hyundai Motors, and SK, there were long lines due to the number of visitors waiting to enter.

The number of Korean companies participating in this year's CES was 502, the second-highest after the host country, the United States (1,300). Qualitatively, it has also grown to become a country with the most awards (139 times) at the CES Innovation Awards this year. 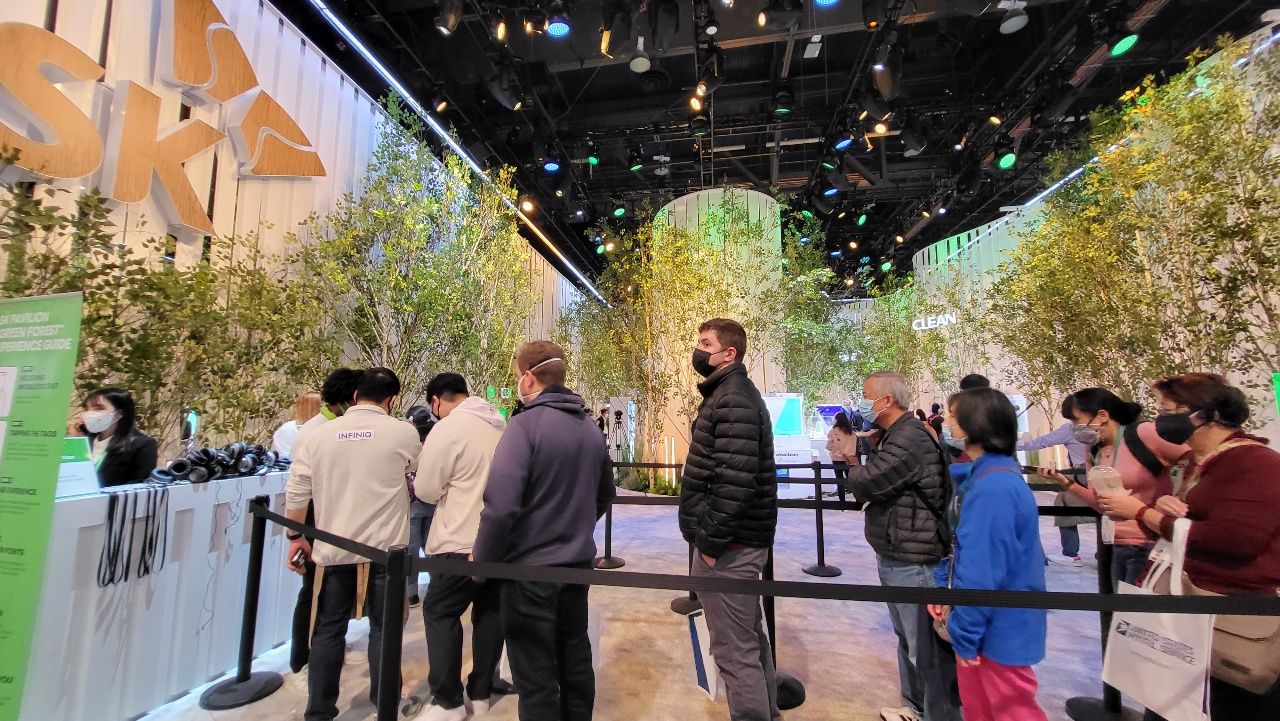 Visitors line up at the entrance of SK Group's booth at CES2022 in Las Vegas, USA. Reporter Kim Kyung-jin

However, it was found that Korean companies have room for improvement in new business areas such as artificial intelligence (AI) and robots. As a result of analyzing the technology trends for which Korea received the Innovation Award, smart devices (52.9%) accounted for more than half, and connectivity between devices (16.3%), AI/robots (11.1%), and environmental/social value/governance (ESG) 7.2%) was found to be low.

Regarding the food sector, Kyu-seok Lee, Associate Research Fellow at Hankyung-yeon, said, “The small proportion of new industries directly related to future growth in the era of the Fourth Industrial Revolution is something that cannot be overlooked despite the achievements of Korean companies. There is a need to ease regulations on new industries in line with the speed of technological development and industrial reality,” he emphasized.

Meanwhile, as a result of analyzing the technologies and keywords that became a hot topic at CES from 2010 to this year, Hankyungyeon revealed that there are four global technology trends: smart devices, AI/robots, connectivity between devices, and ESG. Starting with computers (PCs), laptops, and smart TVs in the 2010s, smart devices have evolved into foldable tablets, smartphones, and means of transportation in the 2020s.

Connectivity between devices has evolved from applications (apps), smart cars, and smart home/city technologies in the 2010s to platforms and ecosystems in the 2020s. In the field of AI and robots, which started from robots, it has evolved into drones and voice recognition home appliances, and as the ESG field emerged from 2016, social responsibility, personal information protection, and eco-friendly technologies were introduced.

Ryu Sung-sil's 'The Burning Love Song' lays bare primal desire for wealth prevalent in Korea's neoliberal market economy. The artist saw that such an obsession with an elite upbringing and wealth could speak to one aspect of Korea's particular economic sensibilities, as the country's rapid growth brought equally swift changes to people's financial statuses. Read more to discover how art informs the Korean social discourse.

Buckwheat noodles is a summertime staples in Korea. When the scorching weather makes you lose your appetite, it is hard to resist the slurpable noodles that can be served either hot or cold. Known for their unique texture, buckwheat noodle lovers seek dishes that ditch the heat for added flavor. Read here to discover the interesting ingredient and a recipe to add into the mix!

How Mindfulness Continues to Spark Inspiration and Incense

Incense burning has been practiced in Korea for centuries. In the 8th to 14th centuries, incense burning was an essential part of Buddhist rituals. As early as the start of this century, incense was primarily used only for special or ceremonial occasions. Today, it is used for meditation, yoga or “mung” (the Korean word for a trance-like state) sessions. Discover more here.

Seo In-ji talks working for musicians around the world, creating her own style. Seoul-based illustrator and animator Seo In-ji has worked for the likes of Girls’ Generation, Red Velvet and NCT Dream. The Korean artist based in the UK brings a global perspective to her work with non-traditional elements like voluptuous women, cute in bright colors, and having fun. What does her more boy accepting art mean for the SK art scene future as a whole? Read along here.
Continue reading

Insider spoke to seven South Korean tattoo artists about the paradox at the core of their profession, as they build up social-media presences to attract customers but hide their workshops in basements to avoid drawing the scrutiny of the law. South Korean tattoo artist Ilwol Hongdam has inked close to 4,000 people in the last 10 years, many of whom flew into Seoul just to see him. Read more about the controversial body art here.
Continue reading

Best Unique Gifts for Any Occasion: Inbebo Guide To Winning at Gifting. How many of us have accepted an invitation to gatherings where a gift was needed? Unlike other gift shops, we opt for uncommon goods that give us a sense of wow! Because gift-giving is an experience best shared.

Clothing is an extension of our self-image. It helps define who we are and where we have been. South Korea Hanbok, have evolved into various styles throughout history. Although once only used traditionally Hanbok continues to influence modern style and art. Learn more about the traditional garb, and it's intrinsic link to Korean culture and couture here.

In Korea and other regions of Asia, bamboo is cooked and eaten regularly.
Eaten at the beginning of summer, bamboo shoots have many health and wellness benefits to the body. Such as a slow down the aging process, prevention of constipation and hypertension, and assists in detoxifying the body. Read more for a recipe to add Bamboo shoots to your menu routine!

A battle over play-to-earn (P2E) games in South Korea between the government and the industry has yet to show any signs of stopping as authorities continue to ban the game genre for its speculative nature. But does harsher regulation on mobile games like this negatively affect Koreas P2G exports in the global market? Discover more here.